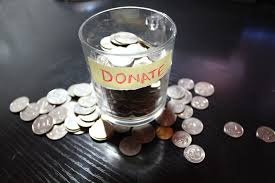 “Americans are conditioned… Conditioned to go to a movie for $2.50 a week. Yet they won’t give $100 a year to clean up politics.”

Any amount helps our meager budget.

Donate $100.00 or more and we’ll send you an autographed copy of the “Phun” book: Every Town Needs a Castle,  Especially When Built of Recycled Junk and Spunk. The hilariously built Rubelian Castle was placed on the National Register, up there with Mount Rushmore and Hearst Castle, in 2013.

Donate $150.00 or more and we’ll include a signed copy of Ordinary People Doing the Extraordinary, The Story of Ed and Joyce Koupal, and the Initiative Process, which Ralph Nader placed on his Top Ten Books to Read List for 2009.

Sometimes think concerned citizens could do a better job?

Think common folk ought to have a People’s Lobby to offset all those other lobbies writing legislation?

Then donate or give an hour a week to build People’s Lobby’s citizens movement that can introduce and pass America’s World Service Corps (AWSC) National Service Proposal (and then perhaps other citizen-initiatied legislation) that benefits Middle Americans.