Taste some of the pictorialized experiences that went into Dwayne’s second book.  It reveals how with phun benevolent leadership many more phunny and happy humans can live in a junk yard and turn it into a Castle… or at least a U.S. National Monument, which Rubelia — or Rubel’s Castle — was crowned with in 2013…

Every Town Needs a Castle, Especially if Made of Junk and Spunk via the publisher.

Rubelia, the Castle of Junk newscaster Harry Reasoner stacked up against Europe’s best, started when a couple young pharmhands turned a rusty valve that began emptying the muddied waters from the pictured reservoir into a new housing development a mile or so downhill… Once the reservoir emptied, Michael shoveled the mud, and built his castled template bottle house in the reservoir.

Until you live in one of these you ca… ca…caan.. can’t believe how cold tin-roofed Californian nights can be and how early in the morn those tin roofs heat like ovens.  Of course the pot belly stove helps — but only for about two hours.

From those muddy bottom beginnings some of us lucky pharmhands helped the portly, giggly mean ruler build a Castle of Junk.  On the way up, many days it looked like this…

Till collapsed freeways beams made Rubelia their homesteaded tool shed.

And OSHA approved :>( scaffolding caused cement and bottles to climb higher and begin protecting my house from aerial attacks.

It sure helps to follow those architectural plans to a “T” when one builds a National Monument.

When you lift a lot of cement, rocks, beams, bottles, and junk, one gets U-2 aerial shots of how big a fort a kid can build when you never let him grow up. 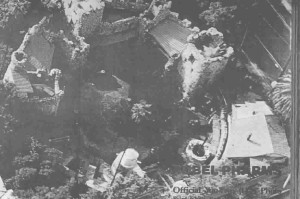 Today the ruler of  Rubelia sits in his rocking chair, and sometimes even lets us pharmhands come up from the damp, dank tunnels to sit with him, among these bird chirping, bell clanging views.  He sometimes even offers us tea bubbled to boiling on one of the wood burning stoves with some pharm picked avocados juiced with lemons and cheesy sour dough toast.  In between his many attempt to keep lighting  his pipe which must be part of his arm exercise routine, he’ll tell one of us to get some buckets of wood.  As always we’d bound down to bring up another bucket of wood, in hopes he may let us up early from the evening’s tunnel work to perhaps drink from his Gallo jug wine in recycled fruit cocktail or peanut butter jarred glasses…

Fortunately or unfortunately — depending on your stomach and perspective, the pharmhands of Rubelia taught me how to build, to drink wine, eat avocados, cook in a big pot and a lot of other stuff some of which is still too classified to talk about. 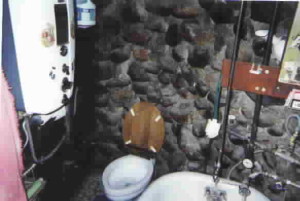 One of the 13 royal Rubelian bathrooms…  Just what you’d expect for confused Californian royalty, yes?  At least that’s what the Queen of England’s hubby thought after his several uses.  “Ah, Sir Michael, where might the toilet paper dispenser be located?” 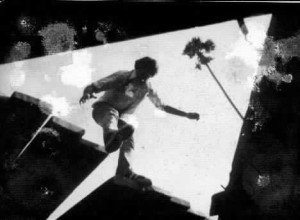 Sometimes that mean, dictatorial Ruler of Rubelia demanded that we immediately return to Rubelia’s damp, dank, and dangerous tunnel work . Seldom were soft landings part of our quick returns to hard labor.

It was always easier for King Michael to have us keep the court yard clean by pointing one of the cannons at us whenever we walked by.

The canons and pointed steel bars, however, kept the alleys ways clear and crime free….  Who wants to spend time in a dark, dank dungeon anyway…

Who ever thought a bunch of goofy guys following a goofier guy in a creosoted hat could pile rocks 7 1/2 stories high?    And who’d of thunk the pharmhands en-rocked Seth Thomas mechanical clock of about 1876 would work better than Stanford’s ground hugging clock of the same vintage?

And none of the hundreds of us who sat on the floor of this refrigerator and sometimes flowed our bodies out into the Tin Palace … will likely forget the talks, stories,political debates, and gallon jugs of Gallo wine in shrimp glasses that flowed in and out of our mouths.

And in that same room where Michael’s favorite Stanley would often and honorably rest in Michael’s other chair, some will always wonder, while others will know, HOW DID THAT MOUSE GET INTO THE LOCKED INNER  WELLS FARGO SAFE?

Oh, Skip it. We won’t answer, lest the answer be  Bush-wacked and plamed  in Scooter Rovian twisted words.  (Read any history?) 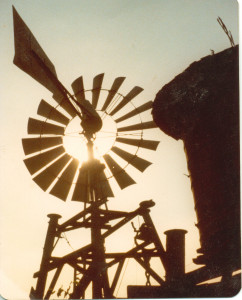 And to think that windmill and water tanks all started going up when little nephew Scottford helped Michael pull a telephone pole hooked to a come-along skyward in order to distract a Live Oak parked city planner concerned about un-permitted roofing being done in the north corner.

Do you really want to know how America secretively put Apollo together and put a man on the moon?  The following Wikileaks declassified photos give you hints as to how…

Russia never really learned where we assembled the really important components of our space ventures.  Who would believe it was on an old Singer Sewing Machine reservoir?

Every Town Needs a Castle  via the publisher or paste

Also available on-line,  bookstores, libraries, and autographed from the author.

In 2013 Rubelia was placed on the National Monuments List. Hearst Castle had to spend a lot more $$$ than MCR’s once creosoted junkyard of Rubelia did to reach such lofty status.

Today, the Glendora Historical Society (GHS) husbands their crown jewel in Glendora, California.  For more information contact the GHS at (626) 963-0419.

For information on Dwayne’s first book: Ordinary People Doing the Extraordinary: The Story of Ed and Joyce Koupal and the Initiative Process.  Or paste…

Nader placed it on his Top Ten Books to Read in 2009 and gave it to 60 of his presidential campaign staff to inspire them with the right stuff.