via its do-good actions.”

Isn’t it time to deploy and employ for at least one generation a peaceful, productive, cost effective American army that will pay a million Americans a year to address spiraling national and international problems?

Isn’t it time to  put a robust army on peaceful battlefields that wins hearts and minds by doing good and improving lives at home and abroad?

Isn’t it time to have a large corps of Americans ready to respond quickly to natural disasters — quakes, hurricanes, fires, floods, etc. in the age of climate change? 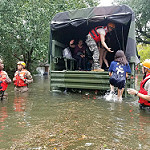 Isn’t it time to put more volunteers into the fields knocking poor housing down and replacing them with healthy housing for families?

Rather than so often knocking them down with missiles and leaving terrorists to pick up recruits from the remains?

Isn’t it time to inspire other nations  to field their own peaceful,development oriented world service corps?

Isn’t it time for an “involved generation”?  A generation that breaks down racial and dumbed-down barriers?

Isn’t it time to build on the Buffet-Gates Giving Pledge by allowing the Wealth-X and Forbes 680 U. S. billionaires to  voluntarily donate 1% of their annual wealth to an escrowed account that invests in 21  million Americans doing healthy national service over 27 years?

Isn’t it time for hands-on peaceful national service rather than believing  TV or finger-punching pixelated screens is service?

Isn’t it time for national service that deals with the disasters Mother Nature is raining down down on us for  for trashing her for so long?

Isn’t it time to heed the warnings of the Supreme Commander of the Allied Forces during World War II and President of the U.S. about the dangers of our increasing reliance on the military industrial estate?

Would the world be better off if for the last three generations the US had a robust AWSCNS program that had sent 50x’s as many Peace Corps and do-good organizations to this part of the world? 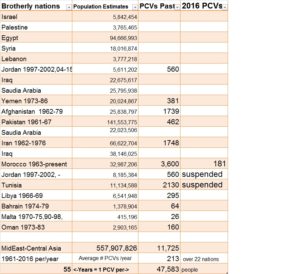 Fund it via Nontraditional Funding Mechanism .

Read more reasons why by clicking picture below.  New tab will open.

Or click on social media sites for  more info,