Around the mid-1960s user car salesman Ed Koupal and his homemaker wife Joyce began their involvement in politics.  By the late sixties and early seventies, they were a dynamic tandem involved in the California initiative process. 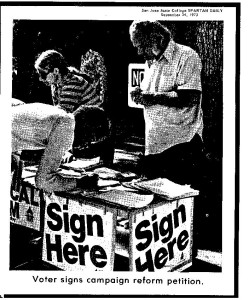 But the early seventies they had spearheaded two Clean Environment Initiatives (CEI).  This second 1972 CEI would have:

Millions were spent against People’s Lobby and their band of “long haired hippies,” who not only debated presumed experts but also gathered signatures that allowed citizens to qualify and pass legislation.

The largest public relations firm in California, Whitaker and Baxter, defeated People’s Lobby’s Clean Environment Initiatives.   However, within a few years everything People’s Lobby 1972 CEI called for was implemented into law. 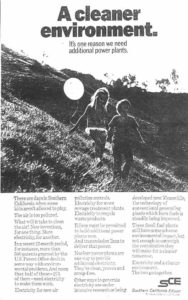 In 1974 People’s Lobby’s Steering Board decided to challenge the power of big money in politics.  The Board qualified for the ballot, along with the help of Common Cause and Gubernatorial Candidate Jerry Brown, the Political Reform Act.  After the campaign, which garnered about 70% of the vote— a record at that time, Rolling Stone Magazine interviewed Jerry Brown. 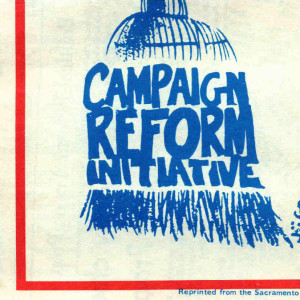 Governor-elect Brown said he thought Common Cause would run the campaign, but that in reality it was the Koupals’ People’s Lobby who drove the campaign to its stunning success.

People’s Lobby’s notoriety grew quickly.  Governor Brown asked Ed to come to work in his administration.  Ed said, “Why would I do that?  We might have to come after you,” in somewhat rougher language.

Nader invited Ed to speak at one of his annual Critical Mass conferences, filled with the activists from across the country concerned about the spread of lightly inspected and regulated nuclear power plants.  Rumor has it that Nader’s staff was told to keep loose cannon Koupal away from Ralph.  The protective strategy worked well, until they let Ed have the speaker’s podium.

As usual, Ed poked fun at the crowd, at several of their strategies, and then left the large audience and Ralph Nader enthralled with his working philosophy that he drilled home to us, his Board Members:

“This country runs on laws. If you want to change the country, write its Laws.”

Nader and Ed spent about two days together.  People’s Lobby was asked to oversee a block of then 16 states, which all had the initiative process.  The Western Bloc initiative campaigns to stop the unsafe spread of nuclear power plants, with PLI adding the “Safe Powers Campaign” to the voters’ public policy learning curve. 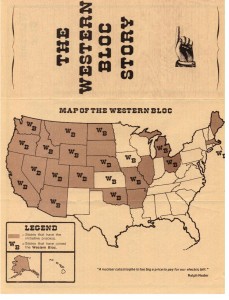 Untold millions were spent against Western Bloc campaigns.  They all lost.  However, the debate and education that ensued stopped the issuance of new nuclear power plant contracts for decades—until the George W. Bush administration.

The country and its legislators got smarter.