Let’s start with the unorthodox method or NON-TRADITIONAL Funding  mechanism (NTFM )  to fund all or some of the voluntary AWSC National Service Program.

What amount or percentage of money from these well endowed sources dedicated to an escrowed AWSC National Service account would it take to launch this peaceful, productive army that would gain the admiration of the world, quell terrorist recruitment, battle climate weirding, assist refugees, raise our educational standards, increase our public policy IQ,  and increase good done at home  and abroad?

If one relied only on voluntary contributions  from the Forbes 400 (and ignored the other 5+ listed above) what amount would those Forbes 400 billionaires annually invest to field 21 million Americans building stronger economies at home and abroad?

Somewhere around 1-2% of just the Forbes 400’s accumulated wealth would fund  this peace and security building investment.

Isn’t it time to “involve” mega-rich public citizens in building an “involved generation of doers”?

Some op-eds regarding the non-traditional funding mechanism to fund fielding 21 million, click here.

Click or right-click above hot link to learn more.

Background: The Richest People In America 2014 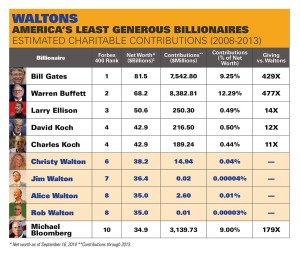 If just the Forbes 400 Richest annually voluntarily donated 1.15% of their annual wealth to an AWSC escrowed account that would be spent only on AWSC National Service, no taxing mechanisms would be needed to fund 21 million AWSC volunteers serving over 27 years.

This 1.15% solution is based on a per AWSC National Service volunteer INVESTMENT of $34,600.

If the American World Service Corps National Service (AWSCNS) Proposal added $20,000+ to cover stipend costs, a little larger donation of 2.5% would be needed.

Another way to visualize how this NON-TRADITIONAL AWSC FUNDING mechanism works folows.  Assumptions:

Here’s how the NON-TRADITIONAL funding mechanism  covers this inflated cost (on behalf of the devil’s advocate) for all 21 million volunteers serving over a  27 year period.

Ten years later, by 2007, Gates and Buffett trumped that donation about 30 times over.  By 2016 over 140 of the world’s richest have pledged under the Gates  Buffet Giving Pledge to give away significant portions of their wealth.

Nader’s book “Only the Super-rich Can Save Us” …

Senators Sanders, Warren, and others…

Social and other media …

has pushed some to think and act  upon income and wealth disparities.

This AWSCNS proposal provides the program that allows the super-rich and the working class to  earn, learn, and shrink disparities, while dramatically reducing the causes of future wars.

Why not use a public AWSC spreadsheet to see if the Forbes 400 would invest 1.15% – 2.5% of their wealth now and make the world a safer place?  Let’s see what billionaires would voluntarily give to an AWSC National Service Escrowed Account to make the world safer for their and others’ children and grandchildren.

To lower the Forbes 400 percentage of wealth donated to the escrowed AWSC account, let us add publically  viewd Forbes spreadsheets for the top paid Celebs, Jocks, CEOs,  as well as for non-tax paying corporations.

Who gave what philanthropically  in 2004:

Charity and the Forbes 400

The Philanthropy Of The Forbes 400: The Generosity Of The Self-Made

Click Why We Need AWSC Umbrella .pdf to learn how to smartly and conscientiously we  could fund 21 million peaceful American national service volunteers with little or no tax costs.

To read one of a series on Non-Traditional Funding Mechanisms (NTFM) that could make the AWSC National Service program work at little or no taxpayer cost, click Popeye and Olive make… and/or click