Collectively we would like to see this proposal forwarded for consideration by Congress as a viable, well thought-out social-economic support system, and certainly, an option for our young people.

ISOJI surmises the lack of technical and vocational tracks in high school and the 30 to 40% students not wanting to/or cannot attend college puts many students at a disadvantage in transitioning into the workforce. Add to that, the evidences that says 75 to 80% of high-schoolers leave the learning environment with low self-esteem, which means low resiliency skills and reduced motivation, which leaves them unsure about self and the future, and indeed, in need of an environment where they feel useful and have the time to acquire a sense of discipline that helps them sort out their life’s path.

Without question, the compelling arguments, from our point of view, lies in the large numbers unemployed and underemployed and the 35 to 40 % of students NOT wanting or UNABLE to attend college or an advanced technical-vocational training institution.

We see the general disposition, unrest, and the higher levels of negative self-worth and low personal efficacy reflected in societal conditions that too often manifests itself in criminal inclinations – and we know how hard it is for young people to overcome what happens to them when they become enwrapped in a discriminatory criminal justice system.

Your office can look at this proposal as a complementary necessity to, without question, the need to build a national infrastructure nationally that serves a myriad of social-economic needs. This AWSCNS program could present a national image for addressing youth, many of whom seem to occupy a social vacuum rife with drugs, violent media, social disconnectedness, separated from the health and welfare attributes that our nation has promised.

For all these reasons, ISOJI and the Multi-Disciplinary Team and our CITT “Collective Impact” Community Equity Building Team, endorses fully, this proposal.

In closing, as a former Air Force intelligence manager let me add another reason this AWSCNS program should be implemented. Whereas the military use to be a haven, an option for growing into a healthy manhood, the military and/or war environment too often today does not provide that route. Service as depicted in this proposed bill offers a healthy route, while providing human resources to our overwhelmed non-profits and presenting to the public a government that looks and acts effective, outreaching, and caring. 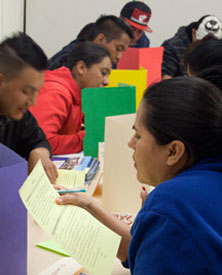 To whom it may concern:

By implementing a national service program, communities can engage their residents in community service through nonprofit organizations and receive a stipend for their work.

National service would be a wonderful way for young people to acquire skills and insights as full-time national service volunteers while becoming part of the service fabric that helps knit our nation together.

As a nation we seem to be losing the cohesiveness that grew out of the Greatest Generation. That cohesiveness grew in no small part from the tremendous number of Americans who did a variety of National Service projects at home and abroad.

I hope you will support bringing character-enriching national service back to America.

Thanks for your consideration.

I have known and admired Dwayne Hunn for many years as an activist, and was an early supporter of his World Service Corps proposal. It seems clear to me a national service proposal such as this, with military service as one of the options,would provide invaluable experience to our own citizens in making them better citizens of the world, and also to help so many other countries in so many other ways. In fact, it may not only be the best way, but perhaps the only way, to help undo the damage done to our national reputation in recent years.

Greg Brockbank, President of the: College of Marin Board of Trustees, Social Justice Center of Marin, Marin Democrat Club, Marin Coalition, and candidate for Chair of Democratic Central Committee of Marin. (* Titles are for identification purposes; does not imply organizational endorsement.) 10-05

This is the letter that goes out tomorrow to Jared Huffman:

I’m writing to express my support for Dwayne Hunn’s well thought out and articulated proposal for a an American World Service volunteer job corps that would place Americans (in the) Peace Corps, AmeriCorps, Habitat for Humanity, Head Start, Teacher Corps, Doctors Sans Borders, Red Cross, International Rescue Committee, OxFam, Mercy Corps, and State Conservation Corps members in vitally needed locales and offer a million Americans the opportunity to serve at home or abroad.  These organizations do exemplary work and thereby offer Americans a variety of non-military opportunities to employ and develop a variety of skill sets dedicated to problem solving, enhancing peace and prosperity.

The proposal has been outlined in legislation at: http://www.worldservicecorps.us/world%20service%20key%20proposal%202yr%20volunteer.htm  It is my hope that you might study it and find it worthy of your support. Would it not be wonderful to have a body of volunteers as large as our military dedicated to peaceful service. It could be so and you could help bring it to reality.

Here’s hoping that you find it interesting and will lend you support.

Thank you very much for your consideration.

(Why experienced hands are needed for robust AWSC National Service.)

In response to your request for information on volunteering at Habitat, I am summarizing what I told you on the phone last week.

First, the most important need for Habitat is what I call “non construction building” volunteering.  This is in areas to help in lieu of hiring staff to do the work of Habitat affiliates or the national office.  Focus should NOT be on “swinging a hammer” on a Habitat build site.  While that is important, we have more than enough people to help on this important work.

What we need is usually under the category of professional volunteering.   I consider the best nonprofits to plan volunteering as a strategic resource and actively recruit, train, and retain these important workers, who are generally paid little to no compensation to do this work, but do it out of love of the mission.

Other useful areas where some remuneration is received by workers are AmeriCorps and Vista volunteering which extremely beneficial and cost little to the Habitat affiliate and the national government from securing this kind of service.  I personally have used the Vista program, and the service and person were great.  I also was a service volunteer in the Peace Corps at the beginning of my career and I have to say it helped shape my life and what I think has been for myself a very productive and successful career in government, education, business, and most recently working for a nonprofit.

In the area of volunteer professional service, I would say based on my experience that the following are in high need in Habitat affiliates across the U.S.:

Along with the Government funded service programs like AmeriCorps and Visa which Habitat uses today, the above are some of the other areas that I have noticed where it is imperative that nonprofits utilize volunteers.

Volunteers to me are the most important untapped resource of nonprofits.  If you wish to speak with me further on this, please call at (847) 991-0369.

I am writing to express my appreciation for your work to advance expanded opportunities for Americans to increase voluntarily service in effective governmental and non-governmental organizations. Your work to promote the American World Service Corps (AWSC) Congressional Proposal initiated by citizens and the People’s Lobby, Inc. exemplifies your interest in community service and I applaud your efforts.

Volunteers participating in world service programs gain a deeper understanding of communities other than their own and reflect a level of civic involvement that allows deeper thought and broader generosity of sprit to the benefit the world at large.

Thank you for sharing the program with me. Sincerely,

RESOLUTION OF THE MARIN COUNTY BOARD OF SUPERVISORS

WE, the Marin County Board of Supervisors, hereby proclaim our support for People’s Lobby American World Service Corps Congressional Proposals (AWSCP) that will create an additional one million American volunteers serving in pockets of need at home and abroad; and

WHEREAS, the AWSCP proposals, as reflected in the core missions of the recognizable organizations, would offer peaceful, productive, skill building service to Americans ages18 through 70+ in a time when Americans desire and need to serve; and

WHEREAS, the AWSCP would be more cost effective and produce more skilled, trained, can-do Americans with a deeper understanding of domestic and international policy needs; and

WHEREAS, the AWSCP would produce service completion educational bonus payments or Medical Savings, home down payments, IRA Account investments, or tax credits, and thereby strengthen our knowledge, economy, and competitiveness; and

WHEREAS, the World Service Corps proposals will exhibit America’s team building skills that exemplifies our productive skills, courage, and determination to the world; and

WHEREAS, such service offers Federal, State, and local governments the means to more effectively deal with the aftermath of calamities, build knowledge and understanding among American and world citizens while reducing foreign and domestic crisis management costs; and

WHEREAS, AWSCP will save money for all branches of government who can then dedicate revenues to improving the quality of life for its citizens.

NOW, THEREFORE, BE IT RESOLVED that the Marin County Board of Supervisors encourages other local governments to pass similar resolutions encouraging bipartisan congressional representatives to promptly introduce and pass the AWSCP proposals into law.

PASSED AND ADOPTED at a regular meeting of the Board of Supervisors of the County of Marin held on this 18th day of March 2008, by the following vote:

Thank you very much for sharing your materials about the American World Service Corps.  Active efforts like yours make this journey worthwhile. I hope you will continue to follow our campaign for change. If you want to get involved right away, visit My.BarackObama.com and register for events in your area.