My sister continues to rank as the San Francisco’s Library’s #1 reader of audio books.

Super Spencer Solar Guy and his much better-looking counterpart, Nancy Apple Gal, bring laughs to Marlene’s face with the time they share with her.

This traditionally solid turd dog has developed a case of the unbalancing shakes, often referred to as Parkinsonian symptoms.  While stumbling a bit outside of the medical box, I have been searching for the causes of the symptoms rather than merely masking them with drugs.  Consequently, I am getting an education and new vocabulary touching on such subjects as: Nutritional healing, dopamine, Carbidopa and Levodopa, homeopathy, acupuncture, kinesiology, exercise therapy, herbals, CBD, neurology, immunology, the electromagnetic frequencies (EMF), etc.

Recently, my cell tower/DECT phone/Wi-Fi/smart meter emf radiation has been up to 52 times the Extreme Level of 1,000 micro watts per square meter, or 52,000 versus the extreme level of 1,000.

So, I’ve been remembering that song that mama used to sing to me, “Don’t let your babies grow up to…  have fried brains.”

The recent attack on my solidarity has taken a toll on my wood-butchering, yard work, pulling weeds, etc.…  It has also taken a toll on my efforts to build a robust American World National Service Corps that would help make America and the world strive to be better for people and the climate…  again.

If you can help spread the word, here are some links that propagandized the idea that America should be sending peaceful developmental armies rather than dreadful drones into action.  America should get the world’s nations to peacefully compete via sending missions rather than missiles.

Let’s compete in doing good rather than in doing bombast.  It is the spirit of Christmas and of New Year’s resolutions, isn’t it?

Make a resolution that helps.

Good health to you and yours. 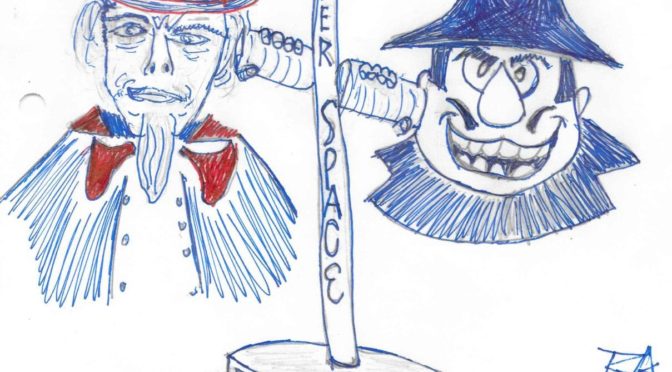 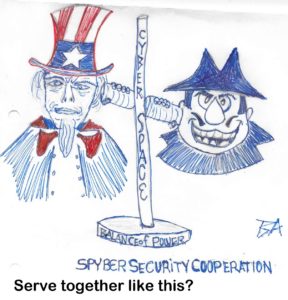 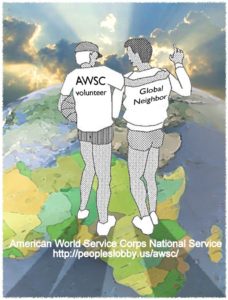 You are receiving this “Thank you” because, in some way, you helped People’s Lobby move its American World Service Corps National Service (AWSCNS) Congressional Proposal.  Special thanks to you if you contacted your congressional reps or set up public discussions regarding the AWSCNS.

The AWSCNS is still not introduced, but parts of it are being picked up.

All three deserve support. The AWSCNS would do the most good and has the most innovative funding proposals to cover its laudable goals, strengthen America’s character, and benefit the world.

The Marin Independent Journal’s Richard Halstead included some of my thoughts in his piece, which you can click to at this link.

Give Richard a read and pat on the back for covering peaceful national service.

A Marin IJ Voice: Creating a force for peace and understanding is here.

This is how a summary for the proposed American World Service Corps National Service (AWSCNS) Congressional Proposal  could potentially look.

The  fuller text, written for the layman to grasp , is at the link above  and below.  American World Service Corps National Service (AWSCNS) Congressional Proposal   – provides the opportunity for every U.S. citizen, and every other person residing in the United States, between the ages of 18 and 74 to perform a 1-2-year period of peaceful, non-militarized, voluntary national service.

National service opportunities are provided through civilian service in a federal, state, or local government programs or with community-based agencies, 501-c-3s, or entities as outlined in the proposal who are engaged in meeting human, educational, environmental, public safety needs. and job and development goals at home and abroad.

Uses transferable educational, housing, health, tax credit, etc., incentives to build, over a seven-year period, the AWSCNS to one million volunteers per year.

Includes as part or all of its funding a nontraditional funding mechanism (NTFM) via a  social media, web-driven, publicly viewable  spreadsheet donation system to voluntarily inspire the Forbes 400, and other mega-rich groups and individuals, to voluntarily underwrite an investment in 21,000,000 Americans doing peaceful national service over a generation.

Another Katrina will happen.  Another earthquake will.  With Mother Nature stuff happens, and you can’t always avoid it.  However, you can competently and humanely temper its aftermath.

Another Iraq and Vietnam may happen.  Another extremist act may.  With politics and policies, stuff happens.  However, you can avoid a lot of stupid policies from becoming bloody economic disasters.

Ø      How?  By making Americans and the world smarter.

Ø      How do we do that?  Give Americans a visionary program in which a significant number serve, share, understand, learn, and teach their young.  From that, America grows a super majority of smarter citizens.  That super majority then votes America away from stupid, costly mistakes that cost us dearly in blood and economy.

Ø      What is that vision?  It’s the citizen-initiated World Service Corps proposed in Congress.

If passed in Congress this year, the proposed laws would annually ramp up America’s best resource until by the sixth year one million Americans, or .6 of 1% of those aged 20 – 60-plus, would voluntarily serve in their choice of the Peace Corps, AmeriCorps, Habitat for Humanity, Head Start, Doctors Without Borders, Red Cross, International Rescue Committee, OxFam, State Conservation Corps, etc.

Why would Americans volunteer to do the WSC?  Because Americans enjoy serving, like playing on great teams, and prefer building over wrecking.  In addition, the proposed legislation would offer simple, cost effective federal financial incentives to volunteers.

Upon completing service, WSC members would receive two years of community plus two years of state college tuition, equivalent educational loan pay off, or equivalent investment in Medical or IRA Accounts, which would be transferable to family relatives.  This updated mini GI Educational Bill of Rights gives the do-good governmental and non-governmental organizations the mix of enthusiastic, experienced, can-do Americans, aged 18 – 60+, who make the world safer and better.

In less dangerous and testing times, John Kennedy wanted the Peace Corps to put a million PCVs into the world.  Then, he felt, it would become a significant force bettering the world and America.  Today, one ofAmerica’s best and most cost effective programs has only about 177,000 returning Peace Corps volunteers.  The World Service Corps proposals legislate a million of our most cost effective resources into dealing with and learning from world and domestic problems.  It does so at a total (stipend plus incentives) annual cost less than 1/10th what it costs to maintain each of our military personnel, which is soaring past $500,000 each when supplemental and off-budget costs are added.  What a huge, long run cost and blood savings bargain.

Sure, a million WSC members physically improve the world.  They do so by working shoulder-to-shoulder with the world that wants to idolize them.  Perhaps more importantly, they enlighten the world’s superpower, whose steps can improve or destroy chunks of the world, by directly exposing Americans to global village needs.

Only about 15% of Americans take out passports.  Many of them have corporate or Club Med world experiences.  The WSC exposes more Americans to the classroom of world needs, so that their voting decisions are based on real life experiences, rather than on forgettable TV designed for couch potatoes.

The WSC raises America’s political and policymaking IQ.  That, then, keeps American voters from stumbling into shortsighted, costly, or bloody policies that we could avoid by pursuing visionary, practical, cost-effective policies.

Imagine, if the WSC had been running for years.  Its incentives would have inspired more states to start Conservation Corps.  The day Katrina struck thousands of those new and expanded state Conservation Corps, plus thousands of Red Cross, Americorps, Habitat, Doctors Sans Borders, International Rescue Committee, etc., volunteers would have been moving into Mississippi and Louisiana, with or without a Federal Emergency Management Agency passport.

The World Service Corps www.worldservicecorps.us needs your local and national support.  Before the next hurricane or earthquake, before the next terrorist act, citizens need to enlighten local, state, and federal politicians, so they will enact the WSC legislation to send a million can-do Americans into our and the world’s classroom of needs.

Dwayne Hunn of Mill Valley is executive director of People’s Lobby and sponsor of the World Service Corps proposals.  He served in the Peace Corps.